This article is available in:

After a model (classifier) is trained by machine learning in a classification problem, its performance needs to be evaluated.

This article discusses the following, which are its evaluation indicators

We also describe how to calculate the above using scikit-learn.

You can try the source code for this article from google colab below.

To simplify matters, we will limit our discussion to the two classes of classification problems. Here, we consider classifying data as either + (positive) or – (negative).

Now, when the classifier is fed test data and allowed to make inferences, the following four patterns arise.

These four patterns above define the evaluation indicators for various classifiers. 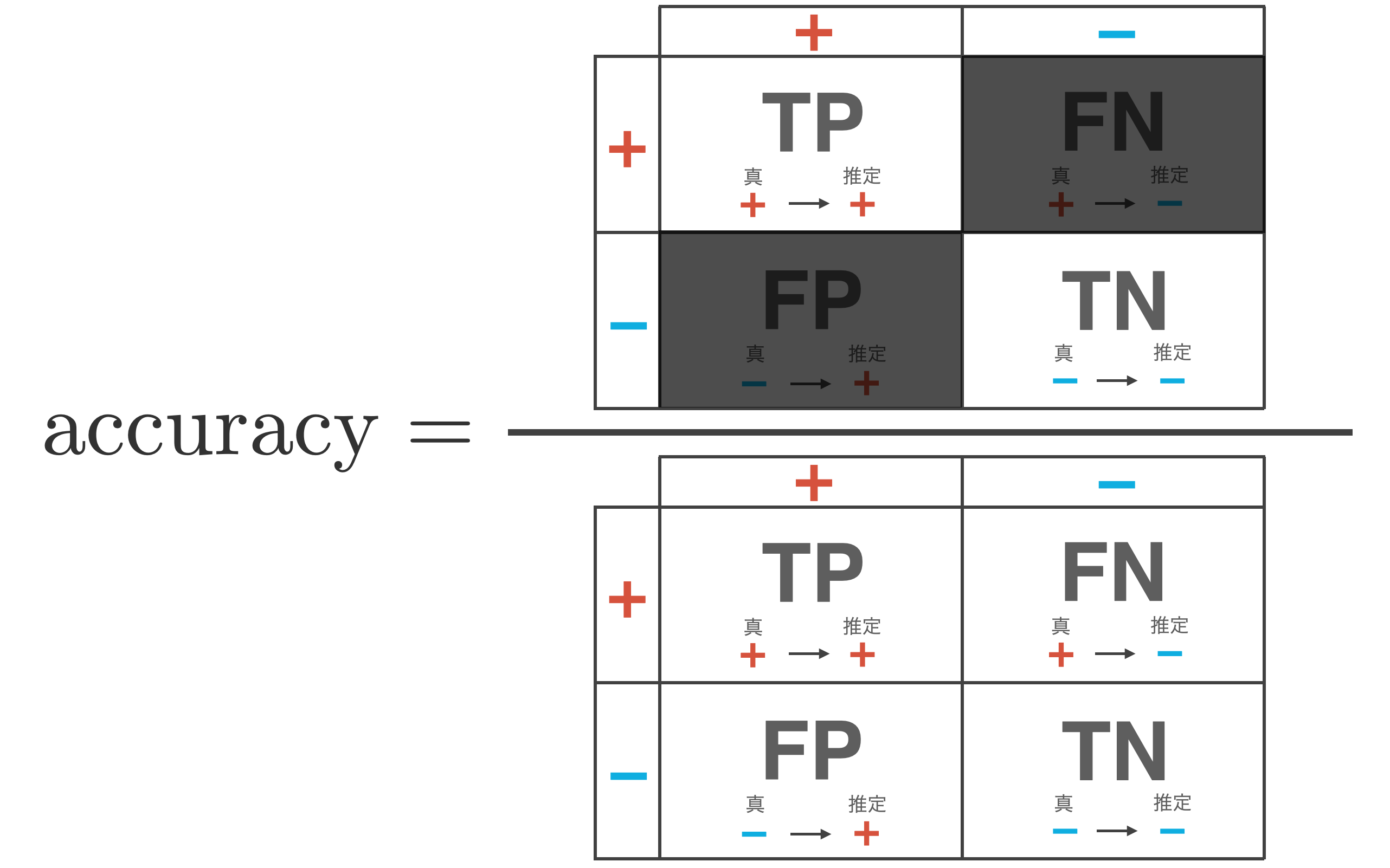 Now, a problem arises when evaluating classifier performance based solely on this percentage of correct answers.

Suppose a discriminator estimates all data to be – (negative) as shown in the following table.

At this point, we calculate accuracy

The accuracy is so high that it is considered a good classifier even though it has not detected a single + (positive) case.

In other words, it is not sufficient to judge the performance of a classifier by the percentage of correct answers alone, and various indicators have been proposed as follows

Precision is a measure of how reliable a classifier is when it determines that data is + (positive). 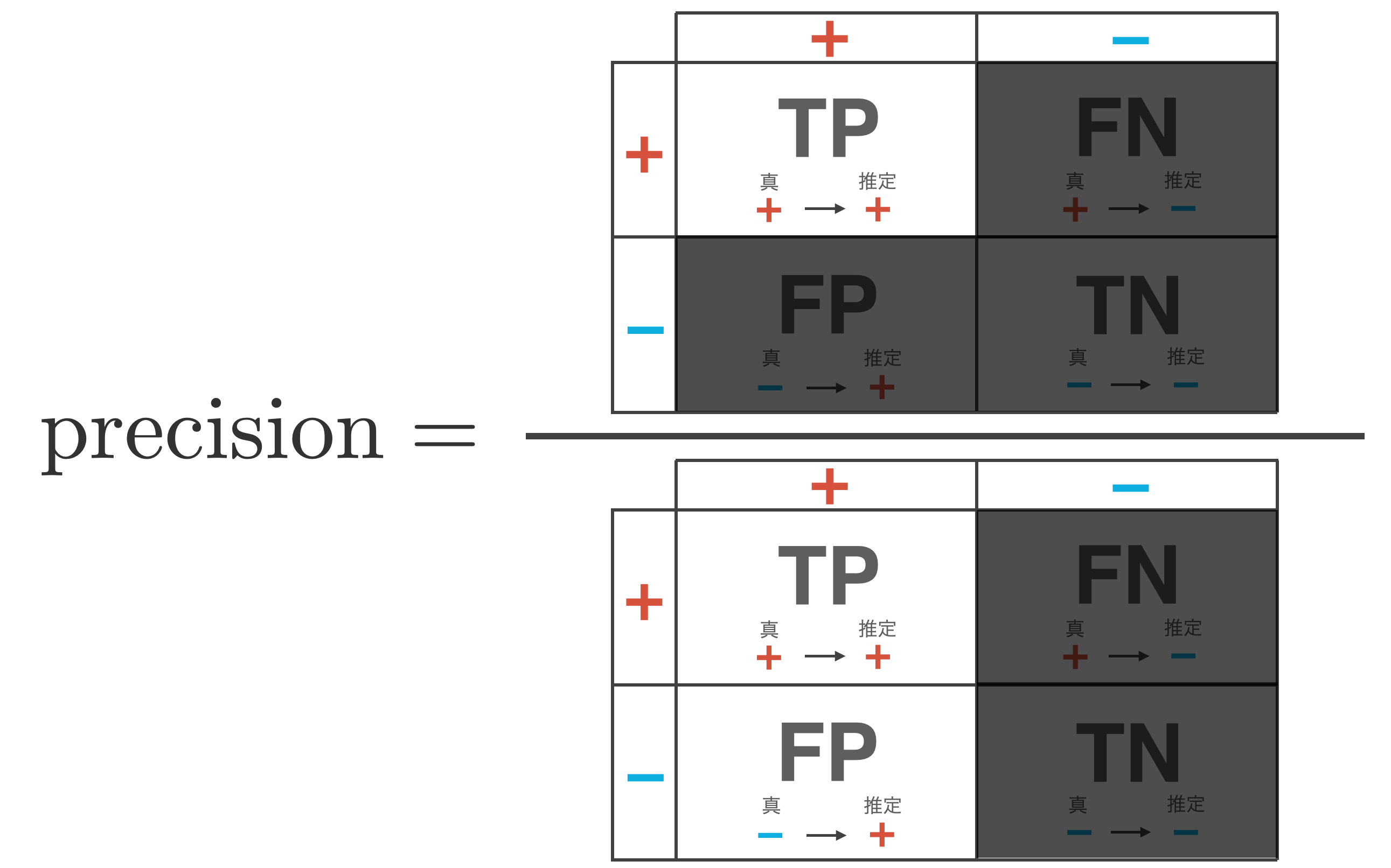 This indicator is mainly used when one wants to increase predictive certainty. However, a classifier that only increases accuracy can be achieved by reducing the number of FPs (the number of cases where – is incorrectly inferred as +), i.e., by using a model that judges + more strictly.

Recall is a measure of how well the classifier correctly inferred + (positive) out of the total + (positive) data. It is also called the true positive rate (TPR). 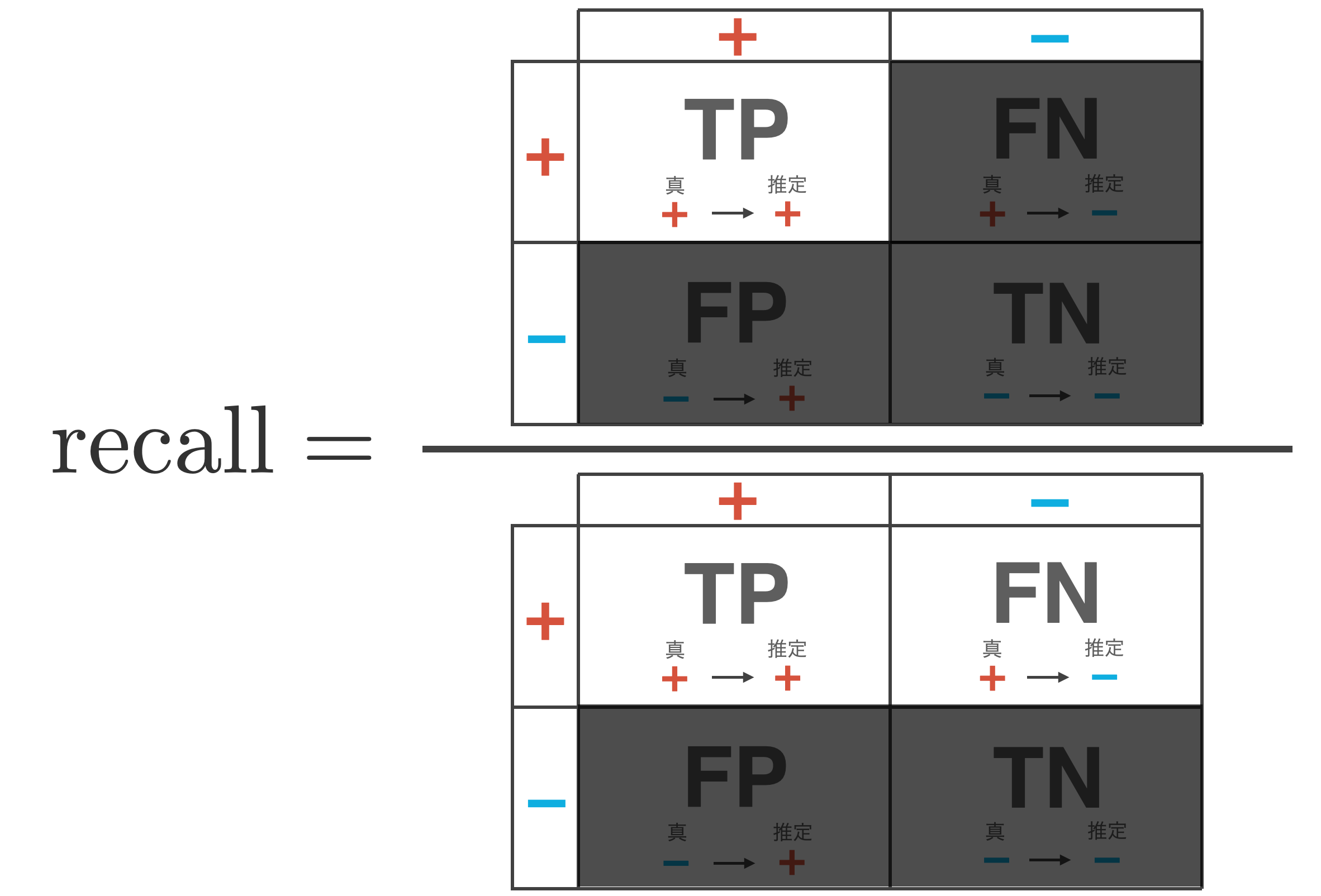 When the importance of reducing FN (the number of cases where + is incorrectly inferred as -) is important, this indicator is used in cases such as cancer diagnosis. However, a classifier that only increases the reproducibility can be achieved with a model that loosely determines +, or in the extreme, a model that determines + for all data.

The false positive rate (FPR) is a measure of how much of the total – (negative) data the classifier incorrectly infers as + (positive). 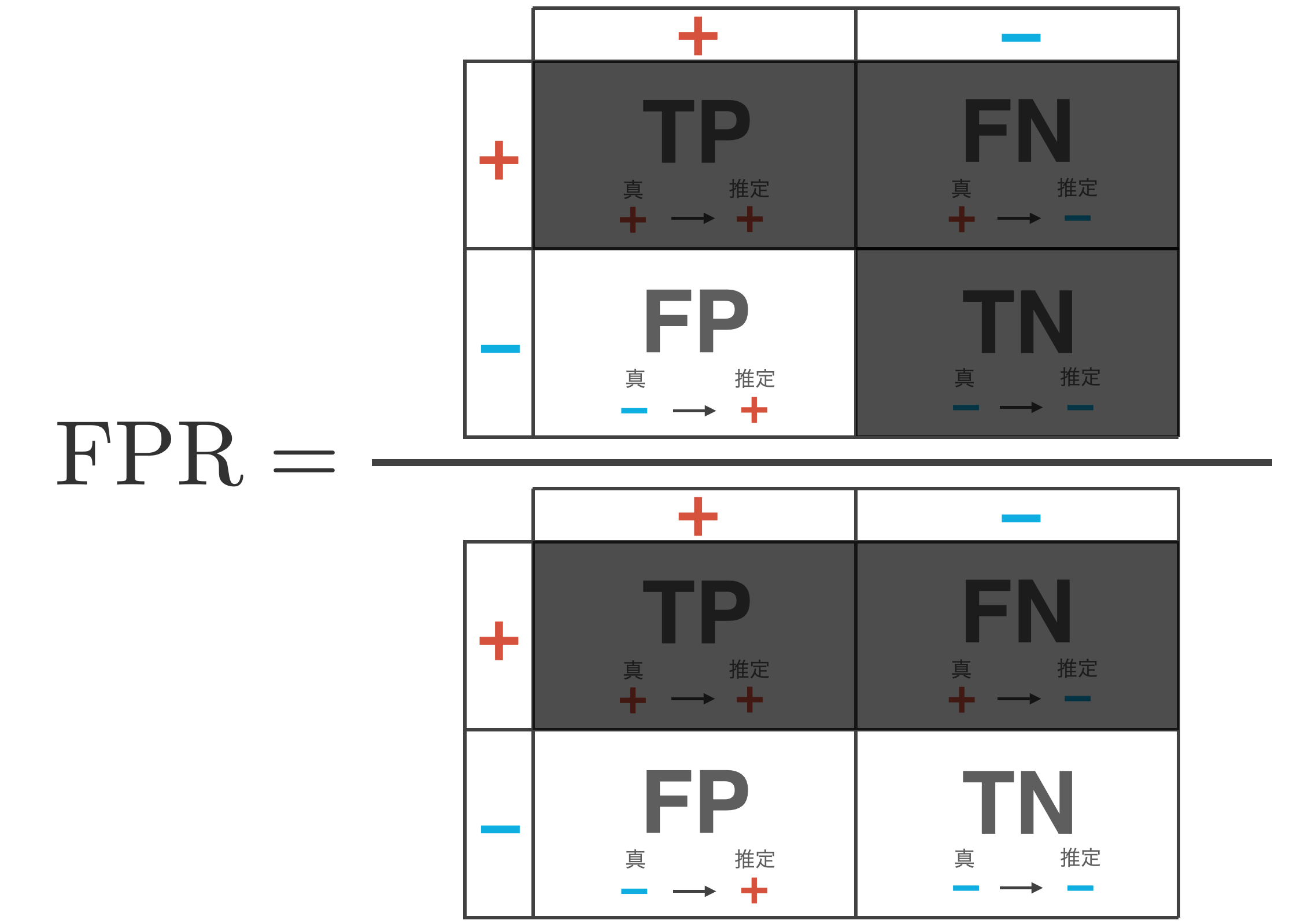 A small value for this indicator is desired. However, a classifier that reduces only the false positive rate can be achieved with a model that judges – for all data.

This FPR and TPR (= recall) are used in the ROC curve.

▼Click here to see the contents of the ROC curve.

The above indicators can be easily calculated using scikit-learn.

First, we generate the confusion matrix, which can be generated in scikit-learn with confusion_matrix.

To make the output easier to read, let’s display the confusion matrix in seaborn.

The first and second columns of the output results show the results of the indicators when positive and negative are used as positive examples, respectively.

In this problem set-up, the indicators we want are as follows.

You can try the above code in the following google colab

The theory of Hard Margin Support Vector Machines (SVMs) is explained in an easy-to-understand manner.SVMs are a type of supervised machine learning algorithm for pattern identification. It is an excellent two-class classification algorithm with the idea of "maximizing margins."

This article covers multiple regression analysis to model the relationship between multiple explanatory and objective variables and the derivation of a normal equation for the regression coefficient. It will also include a full-scratch Python and scikit-learn implementation.

Implement a hard-margin support vector machine with full scratch and scikit-learn. In this section, we will implement the machine using Python.

Derivation Of “Differentiate By Vector” Formula

The theory of logistic regression is explained in simple terms. Estimating the value of a parameter based on n pairs of observed data yields a model that outputs the probability of a response to any given numerical level.

This article describes how to use keras' ImageDataGenerator to extend data.

Principal Component Analysis (PCA) is implemented using full-scratch and scikit-learn. In this section, we will implement it using Python.

Logistic regression is implemented using full scratch and scikit-learn. In this section, we will implement it using Python.

We will introduce the theory of linear regression, which has a long history in machine learning, especially the least-squares method, and its implementation using python and scikit-learn.
Implementation Of K-means Method, Elbow Method, Silhouette Analysis
【Python】Creating A List Of Consecutive Dates And Times In Pandas.
ホーム
機械学習